Puerto Rican Institute for the Development of the Arts

“Artist Everyone Should Know” 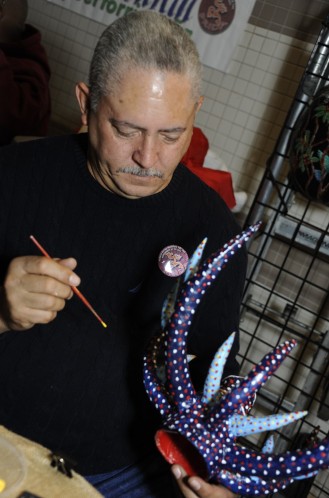 Meet a Puerto Rican Renaissance Man! Felipe Rangel is a multi-skilled artisan who makes sure that his extraordinary Ponce-centric Vejigante masks, tell the story of how, where and why they came into existence.

Working as a teacher in Brooklyn many years ago, Rangel noticed that his students, predominantly Puerto Rican, didn’t know much about their culture. His idea to make the masks and to combine that with Puerto Rican history was a success. While teaching them to make the first basic masks, he also started teaching them about Bomba,  and  Plena.  Now his students were creating art as well as learning to play with instruments that taught them about their roots. Many students took the learning to heart. “One of my students, a Dominican young man, was very interested in how the molds were made because he wanted to take his learning back to D.R. and teach others how I made them. Lo integro en su cultura. De un solo maestro salieron un número de artistas que enriquecieron su cultura con su arte. I created a Caribbean cross-cultural exchange!”

Rangel continued learning.  His methods and techniques becoming more advanced, his masks more refined and elaborate.  He traveled to Puerto Rico to study with masters on the island. Rangel has his own style.  His favorite subject is the rooster, but he has designed a horse, a dragon and likes to come up with new ideas that test his skill.

Rangel is also a musician and plays the trombone. Additionally, he shares, “Juan Gutierrez, you know from Los Pleneros de la 21, he taught me how to play the pandereta.” In a Latin band at Baruch College, he played many gigs with fellow musician colleagues.

Wanting to focus on his Puerto Rican culture, in 1998 he created the La Hermandad Cultural de Artesanos y Artesanas Puertorriqueños and became its first president.  After six years, he saw that the organization was not focusing on the mission, and he stepped down.

A few years later, he came in contact with a new organization calling itself PRIDA begun by Luis Cordero.  Since Cordero knew of his experience with La Hermandad, he asked Rangel to join. A member of the PRIDA Board of Directors since 2016, he is also the current Treasurer.

Why did Rangel join PRIDA?

Artist Rafy Velez knew he wanted to be an artist at age 6. Not many people can say that, but he had an extraordinary experience that sealed his artistic fate and the rest, as they say, is history. At P.S. 128 in Washington Heights, is where all the magic began.  His teacher, Ms. Blumenthal, took his class to the Harlem School of the Arts.

Velez recalls: “They had workshops for the children there and in the art class our group took, we were asked to draw some fruit. An apple. A pear. A banana and some grapes. I thought I did a pretty good job; the fruit looked like fruit. The instructor was impressed as well and said so. I was hooked.”  Velez remembers telling his teacher that he wanted to be an artist when he grew up and he meant it!  He continues, “It’s funny, but that’s what I ask all my students, during the first month of class, to draw the same fruits.  I teach them what I’ve been taught. This way I can see who has a budding talent, who doesn’t and needs more help”.

A hard-working art teacher at the Dr. Richard Izquierdo Health & Science School, he teaches art to students in 6th through 12th grades and really enjoys it. “I’m there for the kids. It’s a lot of work, and I’ve seen some of the kids grow up, so it’s very gratifying to teach them basic drawing skills.”

On his way to teaching, Velez became a sought-after tattoo artist.  A smart kid, he attended the Mott Hall School at the City College of New York and was accepted at the Fiorello H. LaGuardia High School of Music & Art and Performing Arts. At 18, he was at Hunter College and that’s when a tattoo shop opened up on his block that piqued his interest. Although the owner didn’t want to teach him for free, one of the tattoo

artists took him under his wing and lent him supplies and his machine.  Since drawing was his passion, for Velez, working as a tattoo artist combined his skill in drawing with artistry. Velez still does work for private clients who know of him or find him by word-of-mouth. A quick shout out to two of his tattoo buddies, Felix Bayoan Cortez (dec.) and Eddy Peralpa.

20 years went by and Velez started to think of the future.  “Tattooing was nice, but there was no retirement built in. I had to find something else that would give me some security.“ He wondered if Hunter would take him back, so he called the school and was welcomed back.  “I had failed a lot of the classes, so I had to retake every single one.  I had to work hard, but I went back with a different mind-set and it worked.” Once he earned his BA, he received his masters in Art Education at City College.  There were a lot of great teachers there, but Professor Juan Sanchez stood out. He was amazing.”

Velez’ work is heavy into Taino art and one example that reveals his love for his roots are the skate boards he’s been producing. “I started painting boards while tattooing downtown in the east village. I painted a Taino themed skull. After that I just kept painting skateboards because it is a clue to our modern times, but with ancestral art on it giving clues to our past.” One board represents three Taino images. Guabancex is an angry force who is responsible for natural disasters such as the juracans or hurricanes. Guabancex whips up the winds and has two helpers, Guatauba and Coatriske.  Guatauba (thunder) announces their arrival. Coatriske picks up the waters and floods the valleys. The resulting skateboard is a Hurricane on wheels!

Asked how he knows when a work of his is finished, he replied, “A lot of times I don’t. I walk away if I don’t know what to do. Then I come back and continue working on it. I did a very large painting of my grandfather’s house which I hung up in my apartment, but it never felt finished. It had this big spot in the front that was empty and I didn’t know how to fill it.  It wasn’t until I was with family looking at some old photos that showed a picture of the same house, but in this one, one of my cousins was sitting in front of it. I knew right away that he was the one missing! I was able to finish the painting then and that made me feel good.”

It’s not a surprise that Velez’ favorite genre of art is Native American indigenous art, especially if it is Pre-Columbian. He he is the artisan chosen this year to promote the Comite Noviembre artisan Fair.

What is Velez’ favorite tool to use? “Pencils. All my ideas are sketched. When I get an idea, I have to draw it first, so pencils are important for me. I have a book bag that I take everywhere which carries my sketch pad and pencils It’s good to have these handy when inspiration strikes “

Velez would love to retire to Borinquen when the time comes, but there is still lots for him to do here, so he will continue teaching, tattooing, and painting. It’s a good life.

Contact Rafy: Instagram is @tainoart Face Book: “Velez Visual Arts” Website: www.rafaelvelezjr.com Why did he join PRIDA? I joined PRIDA so that I can meet and learn form other Boricua artists. I also wanted to share my artwork with Boricuas in the diaspora. Photos: ©Comité Noviembre/Ana Alicea 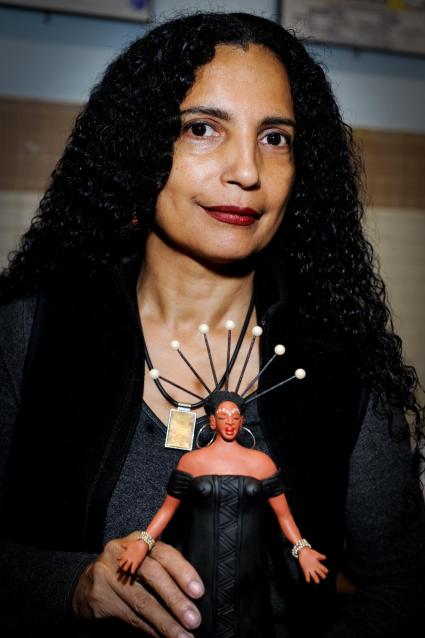 Our Artist of the Month is gifted and talented  Olga Ayala, known for her Hecho a Mano artisanal creations that promote Puerto Rican culture and identity.

Born and raised in El Barrio, Ayala vividly remembers the day her interest in drawing took flight. Her mother was making a grocery list and started to doodle on it. To her daughter it looked like a perfect Disney Mickey Mouse. Interested, she asked how she had learned to do draw like that and would she teach her. It turns out her Mom had wanted to be an artist, but once married with children, her priorities had changed, and had put her artistic ambitions aside.

Ayala remembers she was always drawing in school and not paying attention to the class.  She attended Commander John J. Shea Memorial School on 111th Street – and in an effort to  harness her energy, the Sisters of Mercy tried put her in charge of the seasonal decorations. She loved it.  When it came time to choose a high school, one Sister, spoke to Ayala’s mother about placing her in either another catholic or a vocational high school.  Ayala: “I was so done!! I didn’t want to wear any more uniforms, or take any more tests! I wanted to go somewhere “special”, to a school that would foster my interests. I applied to three of the schools the Sister recommended, and I chose The High School of Art & Design. It turned out to be the best fit for me.”

A funny anecdote: “When my maternal grandfather, Gregorio Marzan asked me what I wanted to be, I told him I wanted to be an artist. He laughed in my face and told me not to pursue art because I would be broke, hungry and would never be successful. I was so insulted! Obviously, I didn’t pay any attention to him, but would you believe, when he retired, he became an artist! And his works can be found in El Museo del Barrio’s permanent collection–he became the Puerto Rican Grandpa Moses!”

PRIDA actually grew out of the needs of artists participating in Comite Noviembre’s Puerto Rican Artisan Fair that takes place every November. Many of the artists would ask them what the next event would be where they could show their art, but they couldn’t help them. Now, PRIDA sends out bulletins with information on events they can participate in.  Ayala is PRIDA’s co-founder and Vice President. “We need to promote the culture. We have to let others know we are still here.” When people see Ayala’s eye-catching artisan wares, they definitely feel the vibrancy of our culture with which each artwork is infused.